I enjoyed the EAFS conference very much. We organized the workshop on Digital Evidence, and it appeared that we had good attendance from experts within different fields. It remains an issue to make a good workshop were people also can do some hands on and it is not a plenary kind of thing. Of course working in smaller groups can solve this issue. I had also some time to relax in Glasgow, and discuss with colleagues on issues in forensic science.

On Friday morning I chaired a session on Digital Evidence, where Peter Sommer was the keynote speaker. He was giving an overview of the rate of change, and the issue that forensic peer reviewed articles can not follow this rate of change. So not all specific methods in digital evidence that are used in court are peer reviewed, since often one has to do research and reverse engineering to find the particular digital traces, and it is used in that specific case. So if someone would like to follow Daubert exactly, it appears that the exact method is not peer reviewed. Of course a general approach of using digital evidence is described however in digital evidence, also in guidelines of ENFSI www.enfsi.eu . A solution might be a peer review of the method during the case by other experts. Another issue is that most forensic scientist are often loaded with casework and do not have time to publish.

It was good to be at this conferences, and although the papers varied in quality, I had good discussions, and I always learn from these conferences, and see the different approaches within different law systems. The good thing that we also have within our working group is that there is a new standard being developed for collecting Digital Evidence, which should be ready in 2012. It is standard http://www.iso27001security.com/html/27037.html ISO 27037 which will be developed now. I think it is very good since very often digital evidence, such as emails and logfiles will cross borders and jurisdictions if cases are on internet.

After that I had a week to recover, and work on some casework and new Research and Development. Last Friday I went to Brussels and talked to several people of the European Commission concerning the developments in forensic IT within Europe. Also I was discussing on the program of WCIT 2010 http://www.wcit2010.com/ which also handles the rate of change, and the issues and solutions around it. The NFI is the organiser of a track within this conference, and we are looking further in this program.

Budgets are currently tighter within most forensic institutes and government agencies, so we always have to consider more efficient ways on processing forensic examination, and maintaining the high quality. It will give new solutions, and approaches, as long as long term investments are continued. Training and education is always necessary on all levels such that the law enforcement knows limitations and possibilities of forensic evidence, and of course it remains important to have good guidelines which are easy to use and easy to understand, such that important forensic evidence will not be destroyed by accident.
Posted by Unknown at 1:45 AM No comments: 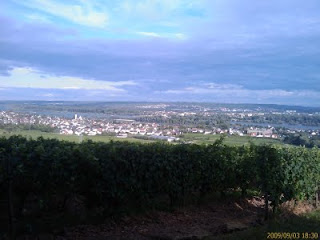 This month starts with a conference in Wiesbaden, Germany at the BKA of the ENFSI Forensic IT Working group. Really excellent talks, and also ideas for joint European Projects within the EU. It is good that proficiency tests are organized, which is a form of collaborative exercise to check if we all have the same results of a case. Also many developments in the field which is always changing rapidly are discussed. It is important to exchange results of Research and Development, since we would otherwise do the same twice with limited amounts of money. The organization was really excellent by the BKA, and we also visited a wine producer in this area known from the Riesling wine, as was organized as gala dinner in the evening.
The second week if for me the EAFS 2009 in Glasgow. Many forensic scientist will visit this conference, where I am looking forward to speak with many colleagues. I have organized a workshop on the Tuesday and will present two papers on the Friday. The week after that I will be at the NFI, and of course doing casework and looking how things have developed.
Posted by Unknown at 3:46 AM 1 comment:

With last month the DFRWS Digital Forensic Research Workshop in Montreal, I had vacation in Boston and Vermont. Vermont is a beautiful green state. It was at the same period as the hurricane Bill, however I did not have much issues with it. It moved with me to Montreal, and then we went over it to Amsterdam. I worked a day at the institute, and I received an request of a proscecutor to clarify my report since there was some discussion on a sentence in my report. It is always good to get this kind of feedback.

Currently I am in Wiesbaden, Germany, at the ENFSI Forensic IT Working group conference http://www.enfsi.eu/ . I am preparing the general presentations as chairman, and some of the issues that we have. Of course I will shortly discuss about the NAS-report, and implications, and furthermore on some proficiency testings. It is excellently organized, and the city of Wiesbaden, Germany is very nice.

Next week the European Academy of Forensic Science will have their conference in Glasgow. I am currently preparing a workshop, and some papers on defraser (http://www.sourceforge.net/) and prnu compare also open source.

It is an exciting time, and of course I have to care not to get the H1N1 flue in the meantime, since I have moderate asthma, however it is also statistics that are involved in this. Lots of travelling these months, and I hope we will have some good projects also on PRNU, and I am looking forward to organize a proficiency test on this, and propose it in London during a workshop at the Forensic Digital Imaging Workshop. Perhaps we should already ask for some European funding, since the financial situation is getting worse due to cuts in projects and budgets, which is of course also not good for the economy as a whole, however is sometimes necessary (and I hope the right things are selected, which is not easy). When I come back, of course I will spend lots of time on casework and administative work.
Posted by Unknown at 2:55 PM No comments: